If you wish to make a game from scratch, you must first invent the universe.

For my latest project, I am diving back into Verilog to create the hardware side of Consolite. For those who don't know, Consolite is the name I've given to my design of a tiny hobbyist game console and associated software toolchain. In my previous posts, I demoed a compiler that translates from a flavor of C to Consolite Assembly, an assembler that translates from Consolite Assembly to binary files, and an emulator that runs the resulting binaries.

In order to "complete the stack" in some sense, the last thing to do was to implement the console on an FPGA. I also wrote a multiplayer Tron light cycle game to check my work, which turned out to be a lot of fun especially since I ended up adding support for multiple SNES controllers. At the end of this post I've added a video of the system in action, as well as an embedded emulator so that you can play Tron in your browser!

This has been a long, extremely interesting project for me, and I may go into more technical detail about components such as the VGA display or SD card reader in future posts. However, this will just be an overview of the capabilities of Consolite, the hardware I used to achieve those capabilities, and of course a demo of the final product.

For this project, I used the Mimas V2 development board with Spartan 6 FPGA (pictured in Figure 1 below). The board only cost $50, which I consider a great deal given how much functionality it offers. 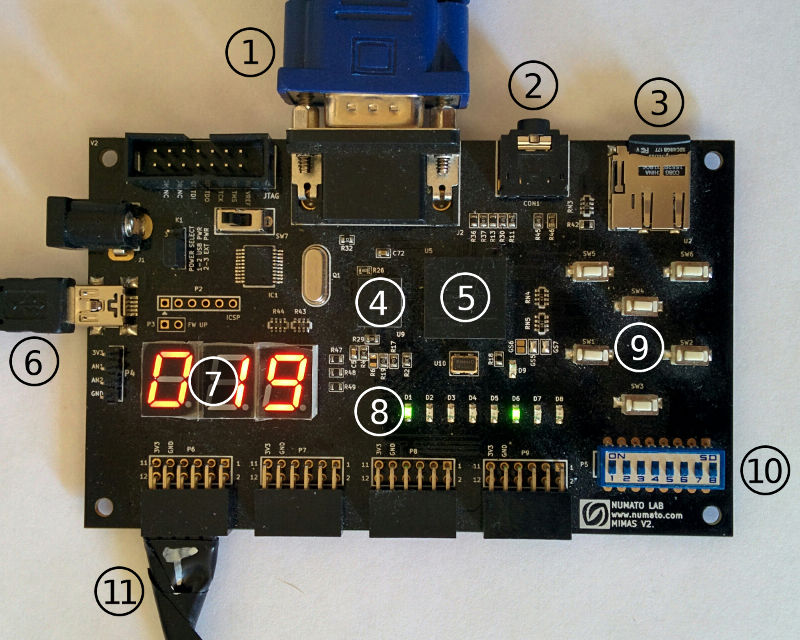 The Mimas V2 has 64 MiB of on-board RAM, which is more than enough to store the 64 KiB of main memory and 48 KiB of video memory for a Consolite program. The RAM is (4) in Figure 1 above. A future 32-bit version of Consolite may take advantage of all 64 MiB of RAM, but for now the 16-bit addresses restrict it to 2^16 bytes = 64 KiB.

The 3.5mm audio jack, (2) in Figure 1 above, is not yet in use, but I plan on adding audio instructions in the future so that games can have music and sound effects.

The microSD card slot, (3) in Figure 1 above, is read-only right now. It is used to store up to 256 programs that can load on boot. See the programming documentation for more information on how to use either the microSD card or UART to load and run programs.

In the future the contents of the SD card could be exposed to user programs for reading and writing. This would be useful for saving progress, storing graphics and audio outside of main memory, creating a file system, etc.

The status of the system is shown on the 3-digit 7-segment display and the 8 status LEDs, (7) and (8) in Figure 1 respectively. In Figure 1, the leftmost LED is on to indicate that the RAM calibration has finished (this is a boot-up process). The 6th LED from the left is on to indicate that the boot has completed. The 0x019 (decimal 25) on the 7-segment display indicates that the program is running at an average of 25 cycles per instruction (CPI). The master clock is 100 MHz, so 100 MHz / 25 = 4 million instructions executed per second. In the future I plan on decreasing CPI by making the instruction and data caches more efficient.

The 7-segment display and status LEDs can also indicate errors, and are critical for debugging both the hardware and the software - they're the only indicator you have if something unexpected happens!

User input can come from a variety of sources, and it is very easy to work with in software via the dedicated INPUT instruction. The buttons, switches, and general purpose input/output (GPIO) ports, labeled (9), (10), and (11) in Figure 1 above, are all exposed to the software. In addition, there is built-in support for up to 8 SNES controllers. Plugged into the GPIO ports at (11) is a modified SNES cable (with a "T" for top). I've written some documentation on how to get the controllers to work with Consolite here.

The board needs 5V power to run. In Figure 1 above the board is getting power from the mini USB port, labeled (6). There is also a barrel jack right above the USB port in the photo, which can be used as an alternate power source.

Figure 2 below shows a high level overview of the circuit implemented on the FPGA chip, which is labeled (5) in Figure 1 above. Some modules are only used for specific instructions; for example, the random number generator is only used for RND, and the millisecond timer is only used for TIME and TIMERST. 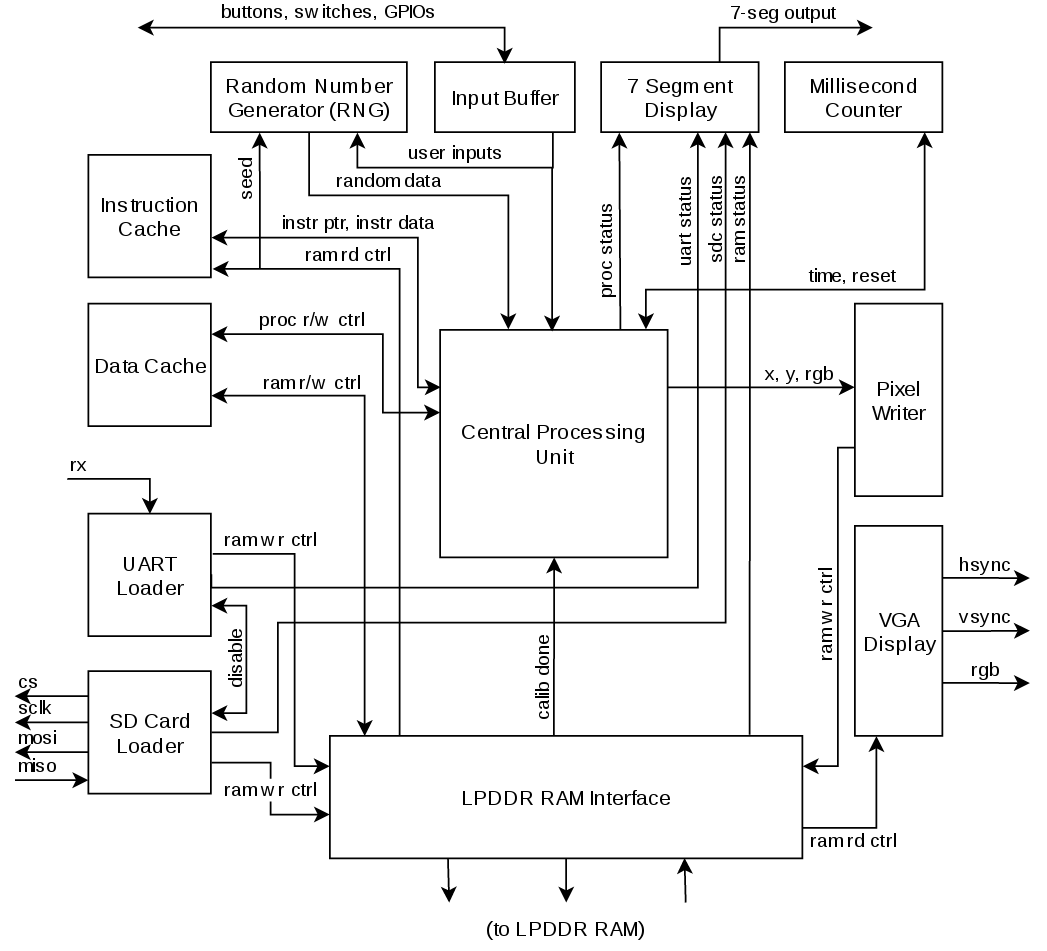 Figure 2. A high level circuit diagram of Consolite as implemented on the FPGA.

Player 1 (blue) uses WASD to move, player 2 (red) uses the arrow keys. Use space or enter to start. Players 3 through 8 are not connected to any controls. If you're on mobile you're out of luck; two people are needed to play. Click the emulator to start, click off to halt. This prevents the emulator from chewing up your CPU while you read my blog.

I've been seeing this sort of art everywhere, with moving points connected by lines that are more solid the closer the points are to each other. It's fun to watch and seemed like

Source code (MIT License) After a few months of development, I'm proud to announce the first release of spaceship.codes! Spaceship.codes is a browser game for programmers, with a built in code

fotino.me
—
Consolite, a Tiny Game Console on an FPGA
Share this